Seventeen countries will compete in the first semi-final and eighteen in the second. We will delve further into the analysis of how we deduct the allocation will affect each country in due course through our in-depth analysis report. 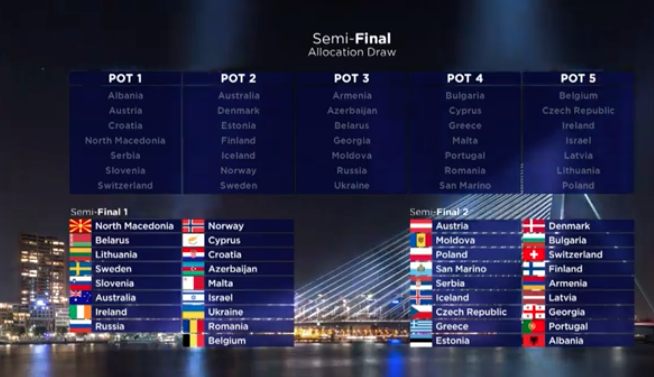 First half of semi-final 1:

Second half of semi-final 1:

First half of semi-final 2:

Second half of semi-final 2:

How the draw worked

The 37 semi-final competing countries have been divided and distributed into 6 pots specifically for the draw. The distribution of the countries in the 6 pots has been based on historic voting patterns. Countries with similar tastes go in the same pot to avoid unbalanced semi-finals.

The Big 5 (Italy, France, UK, Spain and Germany) countries and host country The Netherlands will vote in the semi-finals too. A draw determined which country will vote in which show:

Voting in semi-final one:

Prior to the draw, the Host City Insignia was handed over from the city of Tel Aviv to the Mayor of Rotterdam. This year’s Eurovision presenters; Chantal Janzen, Edsilia Rombley and Jan Smit provided the hosting duties for the semi-final allocation and gave us a taste of what’s to come.

Each of the 41 countries was divided into five groups, named as “pots”. Each pot categorised countries that may vote for one-another due to “cultural similarities” or “diaspora voting“. This is to help spread them evenly amongst the two shows throughout the first and second halves of both semi-final shows in hope of avoiding such a scenario. Here is what country was placed in each pot: