After the semi-final allocation draw of the Eurovision Song Contest 2020 on Tuesday, we now present you the first analysis of the upcoming contest in May. And we look at the statistics of the past, we see that the nations that have had the best qualifying results in the last 10 years, are all seeded in semi-final 1.

We looked at the numbers of all participating countries in the last ten years. How many times did they take part in the semi-finals between 2010 and 2019. and how many times did they qualify for the final? Based on the percentages of each nation, we ranked them all. And out of the six countries that hold a qualification track record between 80 and 100 percent, five of these powerhouses are drawn into the first semi-final!

Let’s be clear: It’s always about the total packages of each entry. The song, staging, camera work and performance are the most important keys to success at Eurovision. People don’t vote for a flag, but for a good song and capable performer. But, statistics don’t lie. Countries with a professional delegation, that take Eurovision serious, tend to have better results than others.

Eurovision 2020 semi-final 1: a battle between a lot of strong nations

The first semi-final on the 12th of May holds 17 countries, and 10 will make it to the grand final. Which means that only 7 of them will not make the cut. It’s an upside for a lot of traditional strong nations, that have all been drawn in this same semi-final together.

Apart from North Macedonia and Croatia, the remaining 15 nations have all qualified for the final on at least half of the occasions they took part. Ukraine and Australia even still have their 100% qualification track record, followed by nations like Russia, Azerbaijan and Sweden. They have only had one non-qualification on their name. 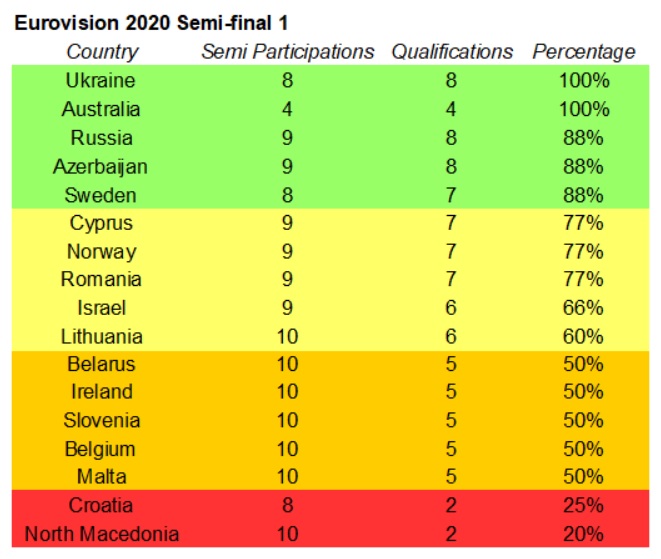 Eurovision 2020 semi-final 2: a big chance for small countries to improve their statistics

The second semi-final of the Eurovision Song Contest 2020 appears to be a very open field. 18 countries will take the stage, with 8 of them not making it to the grand final. There are 6 countries that have not made it to the final on more than half of their participations. So the show on the 14th of May shows a great chance for them to work on those statistics.

Below you can see that Greece appears to be sailing to the final. But, recent years have shown us, that this nation is not in their strongest phase at the competition. 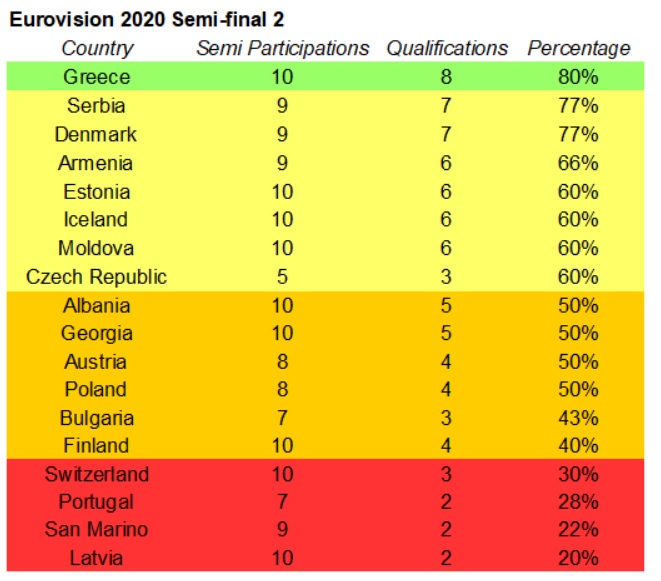 Now that the allocation draw is done, the preseason of Eurovision 2020 is in full swing. Stay tuned to ESCDaily to read the latest selection news and more analysis as all the songs become publicly known.