Anja Nissen is a Danish-Australian singer. She won The Voice of Australia in 2014 and represented Denmark in the 2017 Eurovision Song Contest. In Kiev, she reached the Grand Final and finished in 20th place with 77 points.

Her dream had always been to perform at the Eurovision Song Contest. Australia’s broadcaster SBS asked Anja Nissen in 2015 to represent Australia at their first Eurovision participation in Vienna, however, in the end they chose Guy Sebastian instead. ESCDaily was the first media outlet Anja chose to tell this story to:

Anja Nissen: “I got offered to do Eurovision for Australia”

After the disappointment of not getting the Australian ticket, Anja Nissen decided to look elsewhere. She returned to Denmark, the country of her parents, and got selected for Dansk Melodi Grand Prix in 2016. After a brief struggle over the early release of her song “Never Alone , Nissen grew into one of the big favorites for the competition.

In the end, however, boyband Lighthouse X surprisingly beat her in the super final. Anja finished in second place and again missed out on a Eurovision ticket. ESCDaily’s reporter on the scene, Brandon McCann, stated that she was “heartbroken” after the result.

Her popularity in Australia and Denmark never soared, however. And no less than one year later came a second opportunity in Dansk Melodi Grand Prix 2017. Her new song was a ballad: “Where I am”. She sang it with powerful vocals and won the ticket for Denmark this time.

Anja Nissen traveled to Kiev to represent Denmark there in the 2017 Eurovision Song Contest. Initially, her first rehearsals received criticism because of her strange dress. But after she changed this minor detail, people started noticing Anja’s strong vocals which brought Denmark back into the Eurovision final for the first time since 2014. And because Isaiah Firebrace qualified for Australia, there were now two Australian acts in the Grand Final!

Her final score was 77 points, mostly from professional juries. Anja Nissen finished in 20th place, but her dream had come true: performing in a Eurovision final.

Anja Nissen was born in Winmalee, New South Wales in Australia to Danish parents. Her mother and father emigrated to Australia when they were 11 and 22 years old, respectively. Nissen grew up on her parents’ farm in Winmalee with her older sister and brother.

In 2008, Nissen reached the semi-finals of Season 2 of popular talent-search TV show, Australia’s Got Talent, aged 12. Since then she appeared on a number of TV shows, including Young Talent Time, Mornings with Kerri-Anne and the annual Schools Spectacular. She also performed the Danish national anthem in the company of Crown Princess Mary of Denmark, before winning the third series of The Voice of Australia.

Read back our news articles about Anja Nissen: 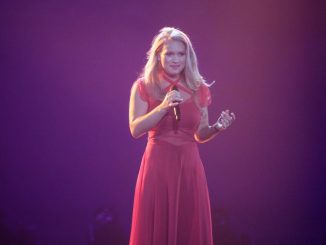 Jury rehearsal Semi 2: Vocal assessment of all the songs

Kiev 2017: Isaiah Firebrace and Anja Nissen meet the press together
Anja Nissen: “Great that Australia embraces my decision”
Anja Nissen: “We sent my dress back to Denmark” 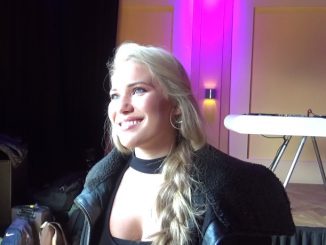 Denmark: Anja Nissen’s outfit gets more comments than her vocals

Anja Nissen: “Friends said about Eurovision that I dream too big”
Anja Nissen: “Incredible to get on the other side of a dream”
1 2 3 … 5 Next »