On a day where most people were looking forward to seeing Netherlands and Russia, it was Azerbaijan who made a surprise surge in the betting odds. Flamenco singer Chingiz makes his home country relive the zeroes, a time in which Azerbaijan was often at the top of the bookmakers.

Chingiz Mustafayev has his roots in flamenco music. Apart from singing he also loves to play the guitar. He’s also a very multi-ethnic participant, being born in Russia and declaring himself to feel connected to Turkey as well. On the press conference yesterday, he declared his hope that Turkey would one day return to the contest. “This year I am representing Azerbaijan and Turkey. However one day I hope both countries will take part on their own.”

Since the first time the Caucasian state entered the Eurovision Song Contest, Azerbaijan showed Europe how it’s done. With highly infectious modern pop songs, often written by Scandinavian composers, they reached the top 10 for 6 years in a row. “Always” was one of the favorites in 2009, as was “Drip drop” in 2010. Both songs finished top 5. And then in 2011, victory finally came to the Azeri with the beautiful ballad “Running scared”. 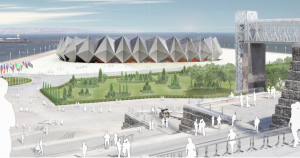 The contest came to Baku, and Azerbaijan was keen to deliver a great event to Europe. The government pulled out all the stops to show Europe the beauty of their country. The tv-show took place in a big football stadium and, to show that they were ready to host it again anytime soon, their song “When the music dies” finished close to the top of the rankings once more.

In 2013, less than a year after the contest in Baku, the Azeri delegation came really close to victory again. With arguably one of the best Eurovision acts and stagings of all time, Farid Mammadov finished in 2nd place. His song “Hold me” received more 12 points than the actual winner Denmark.

The decline of Azerbaijan since 2013

However, interest in the contest soon started to decline in Azerbaijan. It all started in 2014, when elegant staging was not enough to cover up poor vocal skills of singer Dilara Kazimova. And things went downhill from there. In 2016, Eurovision journalists and fans all held their breath during the envelop ceremony of semi final 1. Would Samra manage to scrape through with her song “Miracle”? It was the first time the 100% qualification record of the country was seriously questioned before the contest. Samra qualified, but again a top 10 result proved way out of sight.

Last year in Lisbon, the inevitable happened. In what many considered to be the strongest Eurovision semi final ever, Azerbaijan failed to qualify for the Grand Final. Aisel received the questionable honour of being the first ever non-qualifier for her country. However, perhaps this needed to happen. Perhaps it was a wake-up call, for better things to come this year.

After the first rehearsal, the Azeri song “Truth” made a shocking surge in the betting odds. From roughly 60-1, they quickly went into the single figures. Azerbaijan is now in 4th place at most of the bookmakers, still well behind Russia and Netherlands, but above John Lundvik from Sweden.

The combination of a modern electronic song and a pure high-pitched vocal was already there. Yesterday, the press center saw Azerbaijan combine this with impressive staging. As ESCDaily editor Erik Bolks described Chingiz on his All Rehearsals page:

The singer is standing in font of a upside down triangle. At the backdrop a huge pumping heart of gold is shown. Again a very dark staging in general. A LED background you see a computer model of a woman’s head turning to left and right.

Performing well in the jury vote is clearly important to Russia in this Eurovision. Sergey Lazarev lost the Eurovision 2016 trophy because of the jury vote, and Philip Kirkorov wants to make sure this does not happen again.

Hatari does not really want hatred to prevail

The Icelandic Eurovision act Hatari has talked to ESCDaily about their song ‘Hatrid mud sigra’. They spoke about whether they really want hatred to prevail. However, the answer is: No, they don’t!

Duncan Laurence: “Technical problems with lightbulb will be fixed, do not worry”

Duncan Laurence is confident that the technical problems with the lightbulb in his Eurovision performance will get fixed. “The light will hang on the ceiling. Right now, the production team is figuring out how to hang it, but I trust them fully.”