DJ Darude and singer Sebastian Rejman will sing the song ‘Look Away’ for Finland at the Eurovision Song Contest 2019. The duo was internally selected by the Finnish national public broadcaster YLE to perform three songs in a special final of UMK, in which ‘Look Away’ was crowned the winning song.

Darude released the songs ‘Release Me’, ‘Superman’ and ‘Look Away’ in the last couple of weeks. However, at the final of Uuden Musiikin Kilpailu 2019 we finally got to see the live performances of these songs. A jury and a televote decided that ‘Look Away’ was the best entry for Finland in Tel Aviv. It was the only song out of the three that was also co-composed by Sebastian Rejman.

“Look Away” won the jury vote and the televote

All eight juries gave their 12 points to ‘Look Away’, giving it a convincing victory in the jury vote with the full 96 points. It was followed by ‘Superman’ with 74 points and ‘Release Me’ with 70. 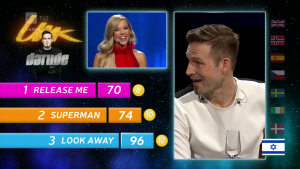 The televote gave 19 points to ‘Release Me’, making it 89 in total. ‘Superman’ received 73 points, getting 147 as a final result. The winning song ‘Look Away’ got a swooping 148 points in the televote, giving it 244 points in total. 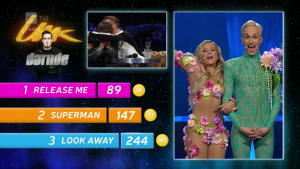