Freedom Jazz has topped the table to win the second semi final of Vidbir in Ukraine, whilst Anna Maria and Kazka have qualified behind them in 2nd and 3rd with My Road and Apart respectively.

Freedom Jazz song was called Cupidon, and they received great praise from the judges, and despite being ranked outsiders, they topped the table. They placed 1st in the jury vote and 1st in the televote scoring them a total of 16 in total, which makes a perfect score, which has not been seen in the Ukrainian national final for some time.

Kazka was the biggest name in the show beforehand. Their song “Plakala” was a huge hit in Ukraine and bordering countries last summer. Tonight, however, they struggled to qualify.

The results in full are as follows: 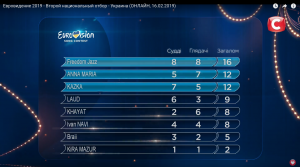 Laud, who has competed in Vidbir before, could only manage 4th with 9 points, despite getting a higher jury score than 2nd place Anna Maria, the televote score wasn’t enough to save him.

The winning performance by Freedom Jazz, can be seen below:

So the final line up for next weekend in Ukraine is as follows:

Maruv will not represent Ukraine at Eurovision 2019

MARUV will not represent Ukraine at the Eurovision Song Contest 2019. The singer has not reached an agreement with broadcaster UA:PBC about a contract she had to sign. The broadcaster made this contract mandatory to take part in Tel Aviv.

Maruv, along with former entrants Brunettes shoot Blondes and Yuko are through to the Grand final of Vidbir 2019 in Ukraine. Maruv is the replacement for Tayanna who withdrew for personal and unknown reasons.

The final field for Vidbir 2019, the national selection for Ukraine at Eurovision 2019, has been announced. Tayanna, who took part in the last two years as well, and both times came runner up, was among the 16 acts, until she took the unfortunate decision [read more…]