Italy proved to be a hit among televoters, but also fared well in the jury vote. This Ultimately led to their success at the contest. France was also consistent, finishing in the Top 3 with the public and jury votes.

Italy’s win at Eurovision this year was helped along by a strong televote, which saw them achieve 318 points. With 51 points less, fan favourite Ukraine achieved 2nd place in the televote with 267 points. France, Finland and Iceland rounded out the Top 5 in the televote.

The jury votes varied, with Switzerland leading the jury vote with 267 points. Following closely behind was France with 248 points. Malta, Italy and Iceland rounded out the Top 5 in the jury votes.

Some of the biggest discrepancies included Malta, who prior to the contest were tipped to win. While Destiny topped the first semi-final with a strong televote, she struggled to amass votes in the Grand Final. Malta finished down in 14th place in the televote, but their strong jury vote pushed Malta into the Top 10. While it’s a respectable result for Malta this year, it may still be disappointing for the Maltese team, who went into the contest as hot favourites.

Portugal also gave a surprise result, with the juries placing Portugal in 7th place. Unfortunately, their televote was much lower, finishing in 19th. Overall, the nation finished in 12th place, and considering Portugal was not tipped to even qualify, this is a great result for the nation.

Bulgaria was another nation that came into the competition hot, but really struggled to capture the attention of the viewers. A stronger jury vote helped Bulgaria achieve 11th place overall.

Some of the biggest surprises of the voting included San Marino, who were tipped to receive a strong televote. In fact, San Marino achieved a higher jury vote than televote. Incredibly, four of this year’s finalists received zero points in the televote. Those nations included the United Kingdom, Spain, Germany and host nation The Netherlands. While Italy and France excelled this year, it was unfortunately a disappointing showing from the remainder of the Big 5.

Here are the full results:

Here are the split results: 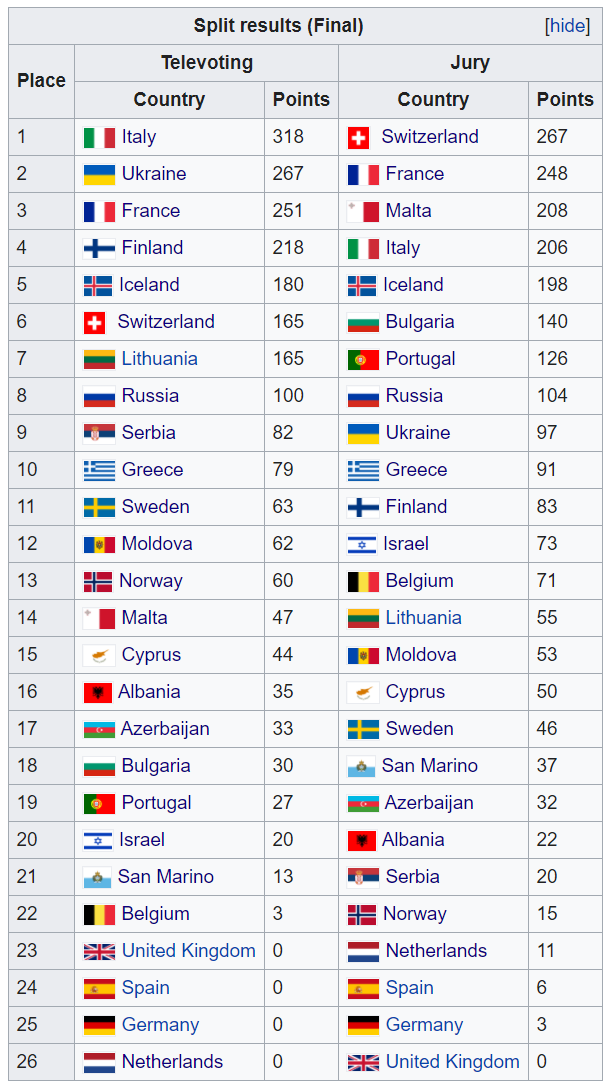