John Lundvik has won Melodifestivalen 2019 and will sing “Too Late For Love” for Sweden at the Eurovision Song Contest 2019. He won the Swedish competition by a landslide victory, taking all (!) the available points from the international jury.

The televote sequence was not so exciting, because Lundvik was far ahead from beginning to end. Not even Eurovision winners like Loreen or Mans Zelmerlow scored such numbers. The televote also went to the gospel-inspired song by John Lundvik. Here he scored 85 points, only 11 short of a total wipe-out.

John Lundvik will sing “Too late for love” in Tel Aviv:

Bishara finishes 2nd in the televote and therefore also 2nd in the over-all result. Liamoo & Hanna Ferm come in 3rd place. More details from the Melodifestivalen 2019 final can be found in our liveblog we had during the show.

Check out the full Melodifestivalen 2019 results:

This was the score after the international jury had voted: 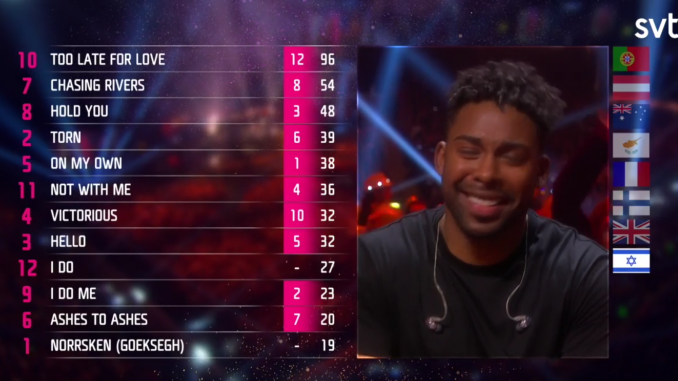