Jorn is the last qualifier for the final of Melodi Grand Prix in Norway, this upcoming Saturday. He won the second chance round on Monday, in which all eliminated acts thus far got another chance to perform the song ‘Faith Bloody Faith’.

After five heats and this repechage round we now have twelve acts that remain for the final. Six of them were pre-qualified for the grand final, but got a chance to already present their songs. Below you can see the final line-up in alfabetical order:

KEiiNO the big favourite for the bookmakers

After seeing and hearing all songs, the bookmakers already have made their mind up. KEiiNO, the televote winner of the Eurovision Song Contest 2019, will be representing Norway again in 2021. Their song ‘Monument’ is the big favourite of the bookmakers. 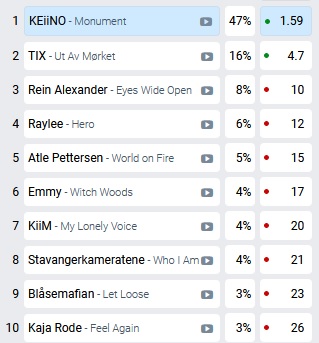 As you can see above, TIX and his rap song are also in with a shot on Saturday, followed by Rein Alexander. Raylee is the first artist that had to qualify through a heat that we see in the list of the bookies.

What are your thoughts? Is the Norwegian ticket for KEiiNO a safe bet? Or do you see another act winning this weekend?