If this Eurovision would have been decided by 100% televote, Denmark would have qualified from semi final 2. Professional juries, however, gave Denmark only 9 points. Instead, they sent Albania to the Grand Final.

The elimination of Fyr & Flamme, who performed in the 17th and final starting position, was the biggest surprise in semi final 2. The Danish duo finished 7th with televoters. Anxhela Peristeri finished 11th in the televote, but received strong jury support for her vocal performance.

Semi Final 2 split results further reveal that Finland won the televote, just two points ahead of Iceland. Switzerland, to nobody’s surprise, won the jury vote with Bulgaria coming in second. Other interesting results included Serbia, which had a big jury/televote split in the Grand Final, finished 9th with both during the semi final.

Televoters also handed out a 0 points – to Czech Republic. In the jury vote, Georgia finished last with 1 point. Altogether, however, Latvia finished in last place. Samanta Tīna was 16th with both televoters and juries, but 17th in the final score.

Below you can find the full results:

Here are the split results: 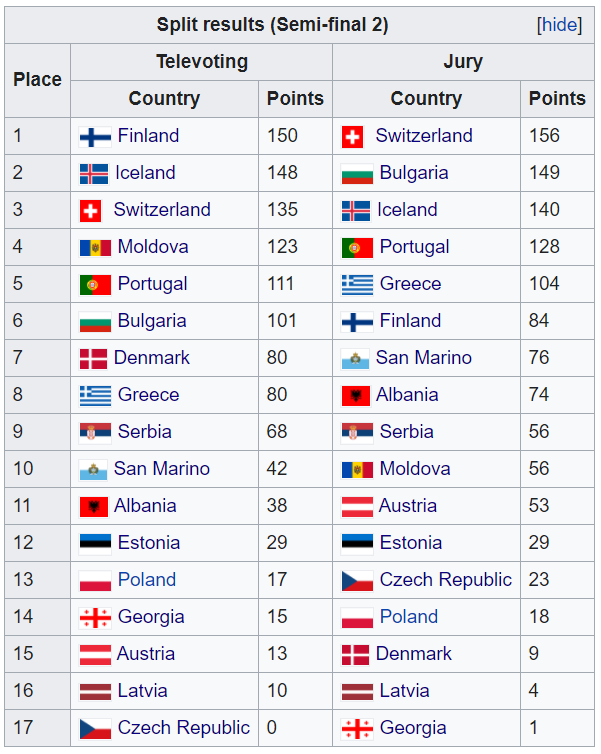 26 will compete in tonight’s Eurovision Grand Final, however one of them will not perform live: Iceland. Daði Freyr from Iceland will use his rehearsal tape from last week. In our Eurovision talkshow Rotterdam Inside, Dennis van Eersel claims that this could create a lot [read more…]

Jury Rehearsal: Vocal Assessment of all songs in the Grand Final of Eurovision 2021

Tomorrow it’s time for the grand final of Eurovision 2021. 26 countries will compete for the trophy in the long awaiting final of the 2021 Eurovision Song Contest. But 50% of the results will already be decided tonight! Follow the jury rehearsal with us. In [read more…]

Editorial: Where to now for the Big 5?

Italy became the second country from the Big 5 to win the Eurovision Song Contest since the introduction of the rule in 2000. They join Germany, who won in 2010 thanks to Lena and her song Satellite. So where to now for the Big 5, [read more…]