The first big Preselection Saturday is tonight with finals in Malta & France, and shows in three more countries. On top of that, Iceland presents its artists for Söngvakeppnin 2019. ESCDaily has reporters on all the battle fields, and through them, you can follow all the live action here!

Liveblog for Saturday the 26th of January

Please keep refreshing this page! That way, the latest comments will appear on top.

Stay tuned to ESCDaily for updates and reactions on all the results of tonight.

An overwhelming 150 points by the televote give him the victory in Destination Eurovision 2019.

Is it enough to make a comeback in the overal vote? Seemone is third in the televote.

She takes three consecutive 12-pointers and extends her lead in the international vote. 18 points is the gap to Silván Areg, while Bilal is more than 40 points behind. The televote can still change everything though… 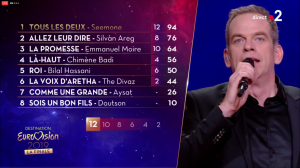 The international voting is not going Bilal Hassani’s way so far. He is in 6th place only, 20 points behind Seemone. She is in the lead, but not far behind is the surprising Silván Areg.

Two countries have voted. The song “Roi” leads with 20 points and Seemone has 18. The voting takes excruciatingly long, as the spokespersons take a lot of time to talk between giving the points. This could take a while.

No rapper for Malta, it’s Michela who wins X-factor. She will represent Malta, but the song is not yet known.

The results are pooring in all of a sudden. 4 qualifiers in Latvia and Edgars Kreilis is among them:

The three jurors give voting advice, but all three members have a different favorite. There is one vote for Bilal Hassani, one vote for Chimène Badi and one vote for Seemone.

The jury does not actually have voting rights, so these votes are just an advice to the televoters.

It’s late at night, and the televoting is open in France, Malta and Latvia.

We already have results from preselection shows in Hungary and Lithuania:

The superfinal has started and two acts are left in Malta. Rapper Owen Leuellen and his opponent Michela.

A much improved performance from Aysat. She deals well with the wordiness of the lyrics, and gives off a great energy, says Joshua Mayne, who follows the French final live for us.

We have now seen all performances. Time for the voting!

All performances are over in Latvia, voting has been opened! Will Edgars Kreilis proceed to the final?

“The song’s simplicity and elegance is its greatest strength,” says Joshua Mayne about Seemone. “And Bilal receives a great reception from the audience. The video footage from his childhood was also a lovely touch.”

A flawless vocal performance from Seemone, one of the two big favorites in France tonight. She looks emotional during the part of the song where she adresses her father (Papa). This is minimalist and yet very emotional, a strong contender for the French ticket to Tel Aviv: “Tout les deux”. 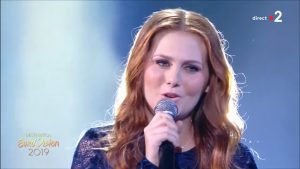 Michela, one of four contestants in the Maltese X-factor final tonight, is currently on stage singing with mega Maltese tenor sensation Joseph Calleja. Our Malta expert Sadie Trent notes that she is the first contestant for the whole of the series to sing in Maltese.

While everyone is waiting for Seeone and Bilal, the “lesser angels” enjoy their time on stage. Joshua Mayne: “Sois un bon fils” (Be a good boy) is a good, upbeat song, typically French, but Doutson seems a little awkward on stage. Unlikely to challenge for the win.

Last year Edgars Kreilis scored a huge hit in Latvia but surprisingly lost the Supernova final. This year, the golden boy returns with a catchy uptempo pop song: “Cherry Absinthe”. However, according to Robin Tas who follows all the action live for ESCDaily, it is Elza Rozentāle and her housebeat popsong which was the strongest performance so far. No results yet in Latvia though.

21:51 – Strange hair will not keep Monika Marija from winning

The haircut is very distracting, but Monika Marija gets very positive reviews on Social Media after her performance of the song ‘Criminal’. The jury also critized her hairpiece. After winning the jury vote, expectations are still that she will also top the televote tonight.

The Divaz are very fun and can certainly sing, with the crowd enjoying their energetic number. But the composition of the song is a little disjointed from verse to chorus, says Joshua Mayne, our BIG-5 expert who follows the French final live.

Our Malta-correspondent Sadie Trent is currently watching the first performance of top favorite Owen Leuellen. He is a rapper, and he is the only one to sing his own songs tonight instead of performing a cover song.

Televote update after eight songs in Lithuania, where Monika Marija has dropped a bit after the latest performances:

Monika Marija will be performing in #11.

France has kicked off the real acts. Chimène Badi delivered a solid vocal performance, says our live commentator Joshua Mayne, and she suits the song entirely. The former Popstars-participant is one of the bigger names in this year’s final in France, yet she is not a top favorite for victory.

The show is almost over in Hungary, and we finished with quite a surprising score. The band yesyes sings “Incomplete”, and much like Ádám Szabós previous attempts, this is a powerballad with guitar influences. In this case the song also has interesting dubstep influences. The jury’s reward is rather lukewarm: with 35 points, they finish in 6th place. Not enough to qualify!

There is, however, still one ticket left through televoting.

Fatal Error, Acoustic Planet, The Middletonz, Bence Vavra and The Sign are through.

The jury only gave her 4 points, but the Lithuanian public does appreciate the song The Rush by Dagna in Eurovizija. After the performance, she shot up to the second place of the televote. Monika Marija still in the lead.

Two more countries select their artist for Tel Aviv tonight. France has just started the Grand Final of Destination Eurovision while Malta picks only its artist through X Factor tonight. That show has just started, too.

His band, The Middletonz, is still in third place of the rankings with only two performances left. It means that he will for sure finish in the jury top 5, which is enough to qualify for the semies.

As expected, Monika Marija is in the lead in the televote in Lithuania. Earlier this week, we already heard that the former The Voice winner had topped the jury vote for tonight.

Kulcs, a song by the rock band Fatal Error, got 45 points and is the convincing first qualifier in Hungary of tonight. Last week’s highest score was 41, so both Fatal Error and Acoustic Planet have managed to beat that score already. It is not yet fully certain that The Middletonz, with lead singer Andras Kállay-Saunders, will qualify… He is currently in third place.

Acoustic Planet is next up and takes the lead in A Dal with 43 points. They now have a very good position to make it to the semi finals in Hungary.

20:16 – Ranking in A Dal after four performances

So far, heat 2 of A Dal in Hungary gives us the following result:

Lead singer of The Middletonz is András Kállay-Saunders, the Hungarian superstar who came 5th at the Eurovision Song Contest in 2014. Later tonight, the band yesyes with lead singer Ádám Szabó will perform as well.

Latvia’s 2019 Eurovision journey starts tonight with the first semi final of Supernova. A total of eight acts are going to be competing for four places in the Grand Final. No Markus Riva tonight, but Edgars Kreilis is making his return tot he contest in this first heat.

After three live shows, X Factor Malta reaches its Grand Final tonight, where four artists are competing to win this talent show, and go on to represent Malta in the 2019 Eurovision Song Contest. The four finalists are Michela Pace, Nicole Frendo, Owen Leuellen, and Petra.

One of the main dishes for tonight is the grand final of Destination Eurovision in France. It looks to be a two-horse race between Bilal Hassani (Roi) and Seemone (Tous les deux). We have a special seperate liveblog for the French final for you, when the show starts at 21:00 CET.

So Hungary’s A Dal 2019 continues tonight with its second heat live from Budapest. A total of ten acts are going to be competing for another six places in the Semi Finals. The band yesyes, which has taken part in A Dal previously, is one of the main candidates to advance to the next round.

Sasha Song failed to show up for the recording of heat 3 of Eurovizijos Atranka in Lithuania. The singer, who took part in Eurovision 2009, is therefore eliminated and leaves behind former The Voice of Lithuania-winner Monika Marija as the biggest favourite of tonights show.

The Hungarians start their second A Dal quarter final as we speak, while the Grand Finals in Malta and France start later at night. You can watch along the show by clicking on the link, which will take you to a livestream, which will open in a new window:

Big news in Iceland tonight, where the line-up for Söngvakeppnin 2019 has been announced. Fridrik Omar (Euroband) and Hera Björk will try to represent the island again, after succesfully giving them a place in the Eurovision final in the past. Read more about it here.