RTS hosted the final of Beovizija 2019 tonight which decided on the Serbian entry for Eurovision 2019. Twelve acts competed in which the winner was selected through a mixture of jury and televoting. You could watch the show live via this link. The final began at approx. 21:00 CET on the date of publish.

After tonight, the winner will become the next official Serbian Eurovision entrant and will attend Tel Aviv for Serbia at the Eurovision Song Contest 2019.

The blog will be updated throughout the show and the most recent comments will be at the top. All times will be in CET.

23:45 – That concludes tonight’s show after Nevena’s reprise. Thanks very much for watching! 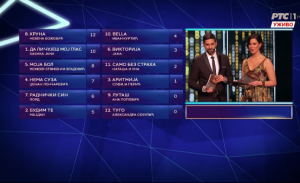 23:15 – Yet another Zeljko non-Eurovision single performance. Another commercial break. Hopefully, the votes can all be counted by the time we return so we can get to the results soon.

23:10 –  Back to Zeljko performing one of his most famous Non-Eurovision singles. Coming up soon is the results!

23:00 – Another retrospective of Zeljko’s back-stage and on-screen time at his most recent participation as a singer at Eurovision in 2012. Next up is… as you could probably guess the song Zeljko performed in Baku 2012 – “Nije Ljubav Stvar”.

22:35 – All four hosts are now back on-stage where we are being introduced to tonight’s Serbian jurors including Bojana Stamenov who will comprise half of tonight’s overall vote. Voting has now begun and will close in fifteen minutes. The first and second recaps are shown of all twelve participating entries.

22:25 – We’re back and as expected, green room interviews next where one of the female hosts decides to chat to one of the artists mistaking him for Johnny Depp, which to be fair he does have a certain characteristic similar to the actor.

22:20 – That concludes all of tonight’s performances. Onto commercial break next before the last green room chats and the interval acts begin.

Tonight’s last song. Alesandra is dressed in a red, full dress alongside three female backing singers to the back, camera-right-hand side of the stage while a male saxophonist performs to camera-left. Enjoyable ballad but questionable lip-syncing from the backing vocalists. Mid-tempo with jazz elements but perhaps not enough to secure victory tonight.

Time for a duet next. Brilliant use of staging and LEDs that involves one of the female singers standing directly in front of the LED screen while the words of the song play while she sings, this is followed by the silhouette of the female rapper who hopefully gets her braces sorted by Tel Aviv (if she wins). Strong girl power image and a powerful song, especially with marching for the final chorus. Was very impressed, can see why RTS placed the track second-last – the coveted position for a reason.

An old-style ballad with Roma qualities next with an interesting performance involving an artist painting swans with paint onto a blackboard at the back of the stage. Unexpected key-change, as you would not expect. Not bad but definitely some elements that need a lot of work to make it into a coherent performance. Can’t imagine this winning but not the worst I’ve heard tonight.

22:05 – Back to hosts for the recent performers to chat in the green room. Standard procedure at this point. Coming up next is the final three acts to perform!

Next up is Ana wearing a black dress with strong, patterned silver accessories. Ana’s voice is the main focal point of the first half of the track until the choir joins her. This is a well-delivered track however if it strong enough to win the whole show will be a matter for the jurors and Serbian public to decide. Decent performance but we’ve heard much stronger tonight, however would love to see this performer try again in Beovizija.

Next up is Nevena who previously was in Moje 3 who didn’t qualify to the final when they represented Serbia in Eurovision and also famously won the Barbara Dex award at the time. She could very well win it again with this outfit however, I quite like it. Dress involves metallic crystals placed around her neck and wrists. The song is a strong mid-tempo ballad with string elements. Vocals are soothing and deliver a state of reminiscence while listening to the track. Another fan-favourite tonight and an exceptional ending involving sparks flying out of the stage. Potential winner.

This would be a genius yet weird performance that involves the male singer doing crazy choreography with two male dancers in quirky outfits if it wasn’t for the fact, the other man seems to be in his 40s/50s. Overall quite a cringe performance as a result, but the song has got some great Balkan qualities and a good beat. Not a bad entry but we’ve heard better.

21:45 – We return to the show with our two male hosts who chat on-stage about North Macedonia before doing some kind of military salute to one-another. We’re back to our female hosts who chat with artists from the second quarter. Next up is entries #7 to #9.

21:40 – Sudden commercial break next. When we return we’ll have the next three competing performances including a previous Moje 3 artist.

This is a haunting track from Jana wearing a white, flowing dress with neon pink and yellow ribbon wrapped around her. It continues to build musically until it erupts with a strong, dance beat with flashing lights everywhere. Brilliant vocals from Jana and as she plays the piano for the final chorus the song slows back to a haunting ballad and fades out. Very impressed with this. The strongest quarter of songs yet and all three songs could do well in Eurovision in my opinion.

These songs just seem to keep getting better. One of tonight’s fan-favourites next and musically it is superb. Ivana is joined by three violinists and a cellist comprising of Wonder Strings alongside a male percussionist. Ivana’s vocals were brilliant and the use of orchestral elements works brilliantly to tie the whole performance together. Musically, the best song so far and I can see this doing well in Tel Aviv if it wins which could very well happen.

Where to begin… this is a genius performance involving the pianist who opens with his implied mother crying while he plays, then goes onto the main singer who performs in a suit with a weird-black rope on his arm. The story involves the mother who is now crying while knitting while three woman bring out more knitting and encircle the artists flowing it up and down. The pianist then comes back with a white halo emplying he has died and the mother cries actual tiers. Finally a performance that captivates you, would not be shocked at all if this wins. Song is a fine Balkan ballad but the performance makes it!

21:20 – We return to our hosts who after introducing tonight’s green room decide to cringe us all by re-performing a far less harmonious Serbian version of “Waterloo” ad-lib. Hopefully, the real artists can return to our screens soon. Back to the hosts interviewing the three acts who just performed.

Injecting a more fresh entry now with “Aritmija”. Sofija is joined on-stage with two male backing dancers alongside background visuals of a night city-scape. Vocals sound strong however I’m not sure this will appeal to the mainstream audience as unfortunately it isn’t well-produced of a track but it has a good enough ‘demo’ to be a potential qualifier in Tel Aviv. Great potential, could win tonight but needs quite a bit of performance and composition work, however.

Next up is Majdan which sounds very dated especially for an Eastern-European style mid-tempo track. Vocals were well-delivered even though it’s overall a very ‘safe’ song. Use of band in performance doesn’t visually stimulate the viewer. Hoping for much more to come from Serbia.

Saška sporting her neon-pink hair performs well while joined by two female dancers. Song sounds very typical Serbian and has some strong points but could do well with a decent revamp to help it stand out from the crowd. Not a bad start for Serbia in 2019 but more thought needs to go into this were it to represent Serbia.

21:10 – Now our hosts have recovered and explain tonight’s performers before the VT rolls for tonight’s first artist: Saška Janks.

21:05 – Another brief retrospective on past Eurovision winners, songs and hilarious moments from the 90s onwards within Eurovision.

21:00 – The show has begun! We’re opening with a retrospective look at ABBA before their Eurovision performance in Brighton with “Waterloo”. This is followed by a performance of that aforementioned song by the hosts in some peculiar choice of kitsch outfits.