Tonight, Sweden picks the song & singer for Eurovision 2019. It is time for the grand final of Melodifestivalen 2019. Who will represent Sweden in Tel Aviv?

We will provide you live commentary in the blog below.

Follow the show with live updates from ESCDaily. Please keep refreshing this page for new updates – the latest updates always appear on top! Timestamp in CET.

John Lundvik seems highly emotional during his reprise. And he deserves to be! What a victory. Thank you for following the show with ESCDaily tonight.

Jon Henrik Fjällgren was 12th in the international voting. However, he finishes 4th in the televote, and now he is in the lead with 74 points.

Three songs left to receive their televote, including John Lundvik.

Televoting results coming right up. Lina Hedlund finishes last, Nano (who was 2nd in the international voting) finishes 11th in the televote.

Another interval act in the lead-up to the televote. The only downside to this Swedish final is the lack of tension: We are waiting for televotes that are not going to change the winner anymore. John Lundvik will represent Sweden in Tel Aviv.

The record of total amount of points will not be broken tonight. This is because there are less juries than usual, and therefore less points to be given out. However, the way John Lundvik won the international vote, is historical. Mans Zelmerlow and Loreen did not score a swiping result like this. Can he win the televote by a landslide too?

The international jury has voted, and John Lundvik receives the maximum score from ALL the countries! Even with the new voting system, in which home audience has a bigger influence, it seems impossible for other entries to catch up with him. The gap with the surprising number 2 Nano is 42 points. 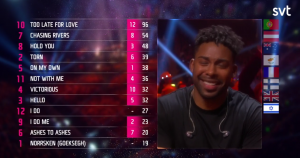 He receives the twelve points from the first four countries. Nano surprisingly in second place.

In the green room, John Lundvik is already in tears.

Linda Woodruff is back for a funny interval video, in which she “borrows” the Trump slogan to suggest making Eurovision straight again.

The first interval act is a tribute to “Dance you off”, the song that represented Sweden in Lisbon. Benjamin Ingrosso received a surprisingly low televote during the Grand Final there. Could this have something to do with European televoters being distracted by the Dutch guy wearing a chicken on his head, right before the Swedish performance?

We have heard all 12 participants in the Melodifestivalen 2019 Final.

The concept of “saving the best for last” does no longer fit into Björkman’s theory. While he previously used to put the top favorites first and last on the show, he has changed his strategy. Arvingarna is probably one of the weaker entries in tonight’s final. The group, known from Eurovision 1993, qualified through Andra Chansen to be the closing act tonight. The singer on the right looks a little like Alec Baldwin. He does, he does.

After two catchy semi-country pop songs, Wiktoria tries with a soulful ballad this year. In my opinion, the best of her three songs in terms of composition and build-up. Vocals are also strong tonight, Wiktoria proves that a show like tonight does not need backing tapes. The act is simply with water coming from the ceiling and Wiktoria standing still for most of the performance. Perhaps not special enough to bring her victory. 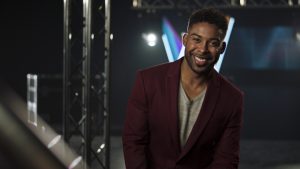 Time for the bookmaker’s favorite. John Lundvik is an experienced vocalist who tried Melodifestivalen once before, and this year – in his own words – “did not expect to come even close to victory”. Still, the Friends Arena goes crazy for this cheerful gospel song. John Lundvik is a true professional. When his in-ear microphone falls out, he continues without blinking and you can’t hear the difference. The composition slightly falters after the first chorus, but the vocals are amazing and the energy from the backing vocalists is infectious.

Finally – a filler song. Just when you think Sweden managed a grand final with 12 Eurovision worthy performances, Malou Prytz comes up with “I do me”. Thank God – they are only human. Quite a flat song, with a few weaker notes vocally. However, even this has a strong performance. And I cannot exclude that this talented 16-year-old girl will return to Melodifestivalen in the future with a stronger entry.

Granted – her vocals are stronger than his. But this is quite a strong entry, that did not receive so much attention in the previews for this show. “Hold you” is a highly modern composition with difficult vocal loops, and the visual performance could have been a great example for how Estonia should have staged their Eurovision duet in 2017. The curtains are blown across the stage as Liamoo and Hanna hold each other and then let go again, just in time for the camera to catch their moment. Well done.

After a small break, we are back with Nano. A newcomer in 2017, he won the audience vote but finished second to Robin Bengtsson on international jury votes. This year he returns with a song fully within his urban style: “Chasing rivers”. Not as catchy as “Hold on”, but artistic and believable, and performed well. Nano wears a silver shiny jacket and at the end of the performance, a kid-version of Nano is projected on stage. He then turns back into reallife Nano.

Anna Bergendahl may be the only Swedish singer ever not to qualify from the Eurovision semi finals – her songwriter, Thomas G:son, has won Eurovision. And this song “Ashes to Ashes” is a lot better than Anna’s 2010 song. The staging with the flowers is beautiful too, especially in combination with the strong camera work. Anna Bergendahl came through heat 2 and Andra Chansen, and her composition has slightly changed since: the beat is louder on the tape now. Her vocals, however, remain strong after a nervy first two sentences. 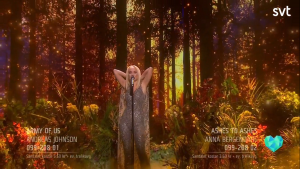 Young YouTube star Bishara sings his piano ballad “On my own”. Strong vocals, especially considering how many competitors use backing tapes. Still, his English pronunciation leaves for improvement and the song itself is far from original. The voting process this year, with people voting per age group, could be interesting for this entry. Will teenage girls give Bishara at least one 12-pointer?

A small “break” after three huge names, with Lina Hedlund who performs a typical Swedish eurodance song. She’s wearing a fluttery pink dress, and stands on a prop at the start of the performance. Solid performance, okay vocals and a song that does not fall through in a show like this. However, it is also clearly not a standout winner from this strong field.

How does Sweden manage to get such big superstars to take part in Melodifestivalen year after year? It remains a miracle to me. Yet, this year they pulled out American hit star Mohombi (famous from the hit single “Bumpy ride”) and he qualified for the final easily with his song “Hello”. The song is catchy. In the act, Mohombi smoothly interacts with screen projections, however, his vocals are not highly convincing. Better than in the heat though. 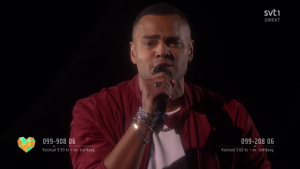 Before her heat, Lisa Ajax was tipped as a potential candidate for victory. However, her voting ratings were disappointing, she needed Andra Chansen to even make the final. As a result, Christer Björkman decided to put Lisa and her dark, mature ballad “Torn” on the unfortunate second starting position. Still, she makes us all wonder how a girl with such an ugly name can be so beautiful. Vocals tonight better than in previous rounds, though the bridge is sometimes shaky.

We start the night with an immediate audience favorite. Jon Henrik Fjällgren finished 2nd in Melodifestivalen 2015, and 3rd in 2017, both times relying on a huge televote support. The traditional Sami singer has a recognizable style of music. “Norrsken” fits into this style: mystical, with flutes and other traditional instruments, a little Celtic even. This song is more upbeat than its predecessors. Vocals were excellent tonight. The picture of the wolf should make this performance memorable enough to overcome the early starting position.

“Welcome to… Jon Henrik Fjällgren! Lisa Ajax! Mohombi!” And there they all come on stage, to the music of Lionel Richie’s “All night long”. Benjamin Ingrosso is on stage playbacking this song. 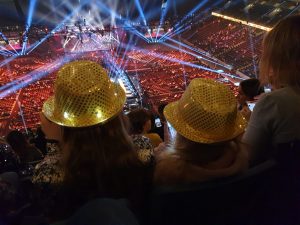 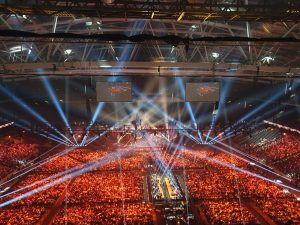 The live broadcast will start any moment now!

John Lundvik and his gospel song “Too late for love” top the charts with the bookmakers. Read all about it in our preview for tonight’s final:

In the previous three editions, the app vote took away power from the audience. Therefore, the international jury had a big say in who represented Sweden in Eurovision. This year, Christer Björkman has changed the voting system.

Read all about it now on ESC Insight.

Later tonight, we too will explain the system in full detail in our blog.

We are awaiting the kick-off of the Grand Final of Melodifestivalen 2019. The final takes place in the Friends Arena in Stockholm, where Eurovision 2016 was also held.