Uku Suviste was the – surprising? – winner of Eesti Laul 2020. As previously announced, he did not get a free pass to the Eurovision Song Contest 2021 from the Estonian broadcaster. He does take part in Eesti Laul 2021 again and is seen as the favourite to win again, by the bookmakers.

Uku Suviste is facing some tough competition though, as the two semi finals take place this Thursday and Saturday night. Twelve songs will compete in each semi and six from each show will qualify to complete the ten song line-up in the final.

The results of the semi-finals will be determined by the 50/50 combination of votes from a professional jury and public televoting for the first four qualifiers and a second round of public televoting for the fifth and sixth qualifier. The winning song in the final will be selected over two rounds of voting: the first round results will select the top three songs via the 50/50 combination of jury and public voting, while the second round (superfinal) will determine the winner solely by public televoting.

Let’s take a look at the main contenders to go all the way at Eesti Laul 2021!

Uku Suviste – The Lucky One

The third attempt was the lucky one was Uku, but he know what happened to all artists in the class of 2020. He is back for a fourth attempt in 2021 (non-qualifier in 2017, 2nd in 2019 and winner in 2020) with ‘The Lucky One’. Another power-song with a build-up to an explosive climax with a long note by Uku. This electro-pop song is the clear favourite for the bookmakers, but to be honest, I am not so convinced this will be the winning song of Eesti Laul 2021. The bookmakers don’t always get it right.

Koit Toome – We Could Have Been Beautiful

Koit can be called a Eurovision veteran by now! He took part as a solo artist in 1998 (12th place) ad together with Laura in 2017 (non qualifier). This year he shows up with an emotional ballad. You have to like this genre to be able to enjoy it, as it is bit much and heavy. The bookmakers predict he will get a very good result, since he is an experienced before, a big name and the song is definitely not bad at all. Just a bit dramatic. But who doesn’t like a bit of drama at Eurovision?

It’s hard to look past Jüri’s last place finish in the semi final stage of Eurovision 2016. His performance was very akward and underwhelming. Has he improved as a live performer in these five years? This year he performs an Estonian Indie pop song and the bookmakers have faith he will do well again in Eesti Laul. We have our doubts and will wait and see if he can deliver a convincing live performance.

Kadri was a jury member at Eesti Laul 2017, but this year she is being judged herself. She has jazz in her voice and we expect her to bring the emotions to the stage, perhaps sitting behind the piano? A warm voice, which if she delivers live as well, is very suiting for juries. Kadri is telling a story, in stead of singing a song. Which could give her a lot of points at this competition.

This is an interesting singer-song entry in Estonia. Clearly written in the Covid-19 era, as Egert claims he wants to be free again and he is missing the past. Some Mumford and Sons vibes in this song. It certainly has the potential to stand out in the field, with the right staging.

It will be the third participation for Egert after not qualying for the final in 2015 and finishing in fourth place in 2020 with “Georgia is on my mind”.

What an interesting combination of French and Estonia. Would certainly be unique at Eurovision. Also remember that Estonia hasn’t send an Estonian song since 2013, even though they did very well with songs in their own language. This is a contemportary mid-tempo pop song, written by Karl Killing who is also competing himself this year. He is surprisingly low in the odds by the way, even though he already got a 6th place back in 2018. Check out his song Kiss Me here, and keep it in mind as the qualifiers get announced this weekend.

Another trip down memory lane with this 80’s disco song. Some strong and convincing vocals in the studio version. If these women do the same at their live performance, juries should reward it. It’s a unique song in the field and well delivered, making it stand out for the bookmakers. Will the Estonian televotes however go for this?

Ivo Linna, who took part at Eurovision 1996 (5th place!) , is opening this song with his trademark vocals. He is joined by his son Robert and the duo Supernova. It all sounds really good in studio, and I expect some real good chemistry on stage between them all. The composition is somewhat dated, but offers some surprises and changeovers. The total package could make that very convincing.

Gram-Of-Fun – Lost In A Dance

Retro is in, as many songs in the charts also have a link to the 80’s nowadays. The main vocalist of this group also has a very suitable song for this genre. It’s catchy, but it does require a certain musical taste to like this song. It’s not mainstream for all to enjoy, which at Eurovision sometimes is a strength as well.

This song makes you think about Rag’n’Bone Man, doesn’t it? Nika has a strong voice, carrying the song. Very curious to learn how the end of the song with a choir will work out on the live stage. That could be very powerful and impressive. But it all depends on the live performance and how it will come across. Because it could give it something extra to boost Nika from the tenth place with the bookies, to the first!

The ten acts above are the ones the bookmakers predict in the final. But who knows, maybe one of these fourteen remaining acts could go for a surprise? You can listen to these songs by clicking on their song title, as the YouTube link will open in a new page on your browser.

Eesti Laul 2021 proves to be a battle between Uku Suviste and Koit Toome for the win, but there are some outsiders that, with the right staging, surely have the potential to snatch victory out of their hands. Think about Kadri Voorand, Egert Milder or Heleza. 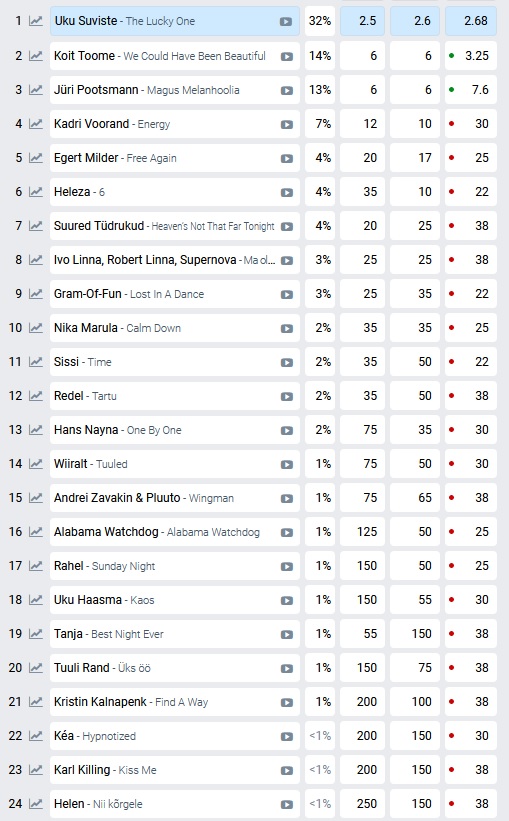 The semi finals of Eesti Laul 2021 take place on Thursday the 18th of February and Saturday the 20th of February, with the conclusion in the final on the 6th of March.