According to the editors of ESCDaily and the bookmakers, the final of Melodifestivalen 2020 will be won by Dotter and her song ‘Bulletproof’. The bookmakers even scale her winning chances as high as 46 percent.

Check out the performance of the predicted winner in Sweden below:

The final of Melodifestivalen 2020 takes place in the Friends Arena in Stockholm this Saturday. It is the 60th edition of the Swedish music competition. Last week the final field was completed after Andra Chansen took place.

Below you can see the running order for the final. Click on the link of the song title to watch the performance.

The bookmakers have a clear favourite for the final: Dotter. The qualifier from the second heat in Sweden is on top of their list for a long time, followed by Anna Bergendahl (ESC2010) and The Mamas, who performed together on stage with John Lundvik in 2019. 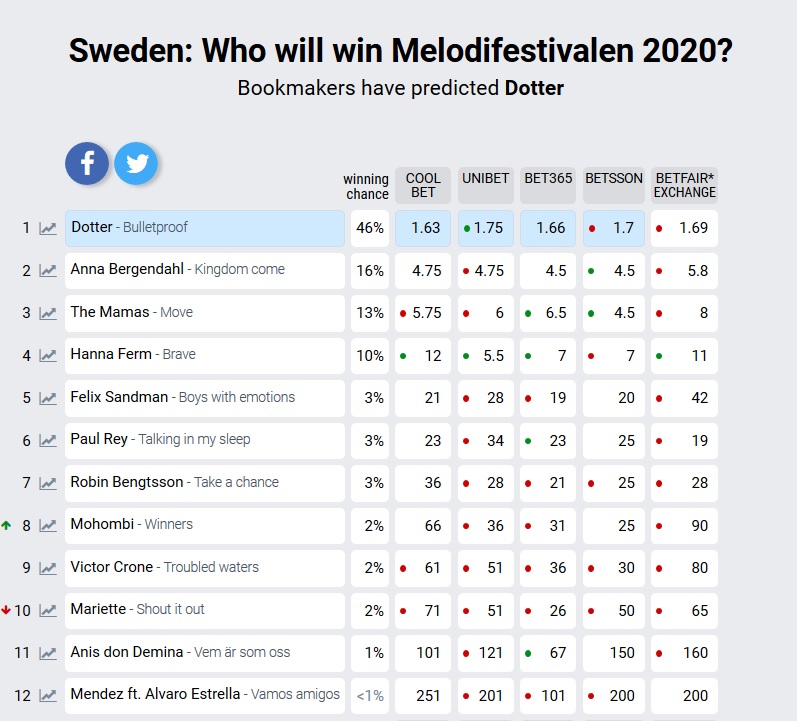 Other notable names in the line-up are show opener Victor Crone, who represented Estonia in 2019 and Robin Bengtsson, the Swedish participant in 2017.

The opinion of the editors of ESCDaily

Each member of team ESCDaily gave their predicted top-3 for the final in Sweden. The outcome? Five out of the six editors that casted their vote also think Dotter will win. Anna Bergendahl got the remaining vote. Here is our ranking based on the amount of times our team predicted a top-3 result for each artist:

Of course, you can follow the final of Melodifestivalen 2020 this Saturday at ESCDaily, with the in-depth coverage of our Melfest expert Allie Lindo.