This Saturday Croatia will select their song and singer for the Eurovision Song Contest 2021. Two of the 14 participating acts know what it is like to represent their nation, as they have done it before. Will one of the make a comeback to Eurovision?

One of these two is Nina Kraljić, who sand at Eurovision 2016. In a poll on Eurosong.hr where 2500 people voted, she comes out as the main frontrunner to win the competition. The other former Eurovision participant is Tony Cetinski, who took part in 1994 in Dublin.

We take a look at the most promising entries for this Saturday and look and what they had to say about the songs in interviews with broadcaster HRT.

Nina Kraljić is taking part at Dora for the very first time, even though she already took the Eurovision stage before! She was chosen internally in 2016 with the song ‘Lighthouse’. Also because she is arguably the biggest name on the list, her song ‘Rijeka’ has received by far the most votes in an online poll by eurosong.hr. 42% of the Dora-fans voted for this entry! Kraljić has said that the song is strong and convincing. It sure has an ethnic, bombastic opening. You can judge yourself:

The second favourite in the competition on Saturday is called Albina, with 17 percent of the fan-votes. She will perform a modern song called ‘Tick-Tock’ , and she said it is an advantage that her team understood the task professionally from the very beginning. She promised her act will be done, as if it was an performance at the Eurovision Song Contest from the very beginning. Sounds promising!

Another contender for Nina Kraljić could be Bernarda with the song ‘Colors’. She is a former candidate on The Voice of Germany and took part at Dora 2019 as well. Back then, she finished in 6th place. She describes her song as positive and energetic with great potential for the Eurovision Song Contest.

18-year old Mia is known for winning season one of RTL Televizija’s Zvjezdice when she was just 13 years old. In 2020 she almost won Dora with the song “When it Comes to You”. At the close of voting, the song had received 31 points, placing second in a field of 16. It tied for the first place but the tie-break rules gave the win to Damir Kedžo. She will compete on Dora with the song She’s Like a Dream’, and describes the entry as energetic, powerful and positive and with a strong message. Could 2021 be her Eurovision year after all?

Tony has already represented Croatia at the Eurovision Song Contest 27 years ago with the song ‘Nek ‘ti bude ljubav sva’. Kiki Rahimovski has also already participated in Dora, and for this year’s performance at Dora he has written music and lyrics. Tony did not plan his return to Dora, but like with many others before, “never say never” prevailed. Kiki, on the other hand, revealed to us which song from Dora 2006 remained in his special memory and that it was this song that prompted him to return to Dora.

Below you can see and hear the snippets of the remaining nine acts in Dora 2021. The Croatian final starts at 20:10 CET on Saturday the 13th of February 2021. According to the bookmakers, Filip Rudan and Cambi are also in with a shot! 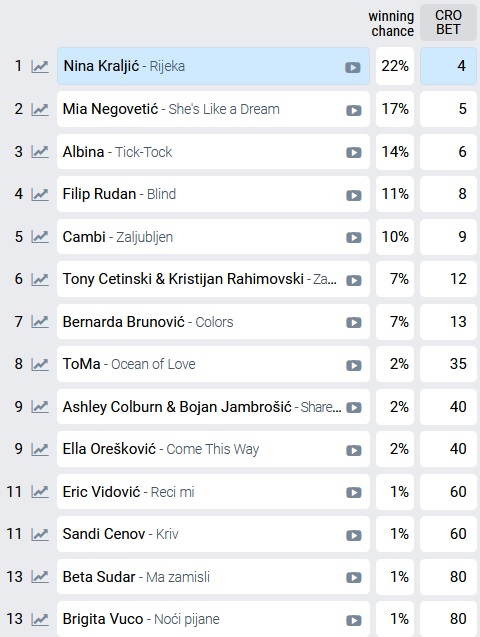