According to the bookmakers, Ulrikke Brandstorp and her song ‘Attention’ will win the grand final of Melodi Grand Prix 2020 in Norway this Saturday. In this preview we look ahead to the closing show in Norway of this weekend.

On the occasion of the 60th anniversary of Norway in the Eurovision Song Contest, NRK decided to expand the competition with semi-finals for the first time since 2014. In the last five weeks, we saw a lot of professional acts that got a direct place in the final. In the five heats, four lesser known artists took the stage each week for another ticket to the final.

The set-up for the grand final in Norway

Ten songs consisting of the five semi-final winners alongside with the five pre-qualified songs will compete during the final at the Trondheim Spektrum in Trondheim. This is the third time a Melodi Grand Prix finale has been held outside Oslo, and for the first time since 1989.

The ten finalist songs will first be performed once, before the viewers vote. In the first round, the four best songs then go on to the so-called gold final. In the gold final, the four remaining finalists will meet in a round-robin format. They are set up in two pairs, where the winners of each pair then meet in a gold duel. In all rounds of voting, the Norwegian viewers choose the winner alone.

According to the bookmakers at Betfair, it will not be very exciting who will win in the end. 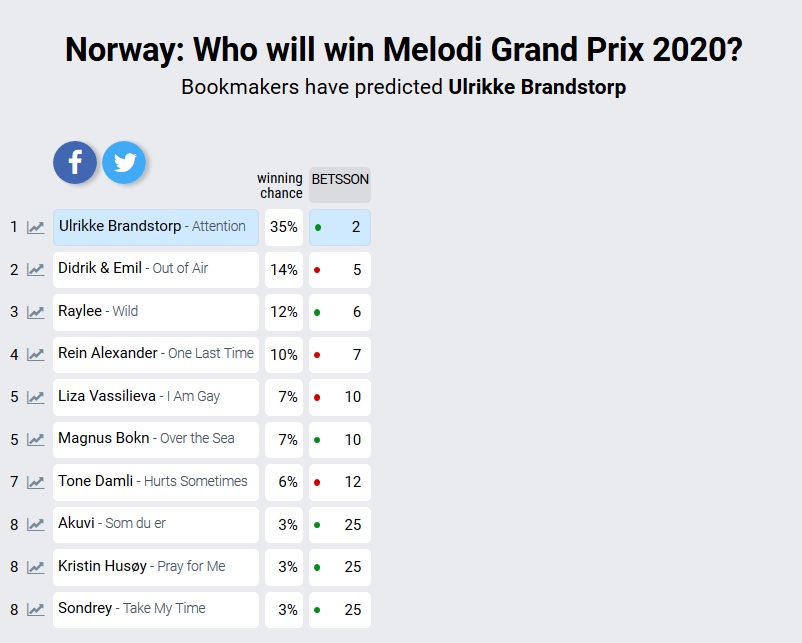 As you can see, Ulrikke Brandstorp and her orchestral song ‘Attention’ is the clear favourite.

Following Ulrikke in the betting odds, it’s Didrik & Emil. But maybe that is also because Didrik is well-known in the community, after representing Norway on home soil in 2010?

Followed by Rein Alexander and the viking staged song ‘One last time’.

Who is your favourite for the Norwegian final? Let us know and tune in to ESCDaily this Saturday for the conclusion of MGP 2020!