This Saturday, Sweden picks their act for the Eurovision Song Contest 2019. It is time for the grand final of Melodifestivalen 2019. Here is our big Melfest 2019 preview.

What do the bookmakers think? How do the performances look? And what are the predictions of team ESCDaily? Be optimally prepared for the biggest preselection show by reading this article!

The Friends Arena in Stockholm will host the grand final of Melodifestivalen 2019 on the 9th of March, starting at 20:00 CET. Over the last five weeks, twelve acts have qualified for this final. There are some big artists and/or returning artists to the show. Like Eurovision 2010-participant Anna Bergendahl, superstar Mohombi and returnees like John Lundvik, Lisa Ajax and Wiktoria.

Here is the running order for the Swedish Melodifestivalen final:

We will now order these finalists, ascending by the position they have with the bookmakers. So the biggest favourites will be listed first, and acts with a smaller chance will be lowest on this list. Our own predictions and personal favourites of Team ESCDaily are at the bottom of this article. 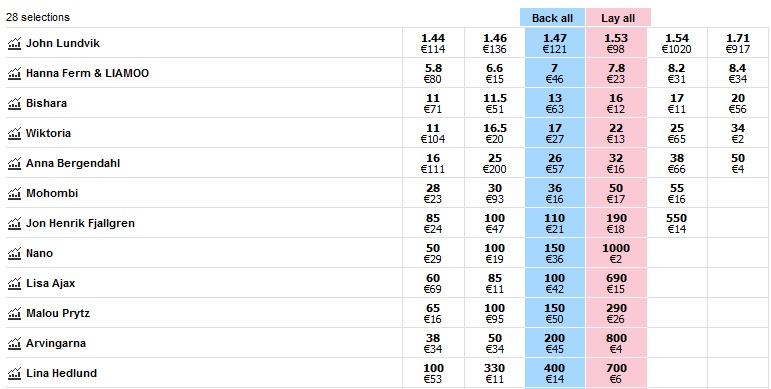 John Lundvik – “Too Late for Love”

The big favourite, by far, for the bookmakers at Betfair, is John Lundvik. The 36-year old singer took part at Melfest in 2018 as well, and finished in third place with ‘My Turn’. 2019 it could be actually his turn, with the gospel inspired song ‘Too late for love’, having odds of 1.47, a strong vocal performance, great interaction with the camera and the backing singers. And another top finish for Sweden at Eurovision?

Second in the last is the duet between LIAMOO (who took part last year as well) and Hanna Ferm. Hanna places second in Idol 2017 in Sweden and is a newcomer at Melfest. The duo earned a direct place at the final in semi final 2.

Bishara Morad was born in Syria and immigrated with his family to the city of Linköping in Sweden when he was six years old. Ten years later, he aims to represent his country at Eurovision. With a young Justin Bieber-sounding song, he might have a big appeal to the televoters. Having many followers on Social Media, he could form a big voting-army of (mostly) young girls, that gives him a televote victory.

Wiktoria – “Not with Me”

The experienced Wiktoria took part with ‘Save Me’ and ‘As I Lay Me Down’ in 2016 and 2017, but now comes up with a ballad. One of the qualifiers of the first show weeks ago, Wiktoria Johansson stands in the rain and sings and emotionally connecting song. Singing from spot #11, she got a great chance at victory from the SVT producers.

Sweden failed to qualify for the Eurovision final only once, in 2010. Anna Bergendahl was responsible for that result, but has returned to Melodifestival for revenge. “There is a new sun and it is rising from the dark”. Anna is back to shine, glow and burn and sings an empowering song, about coming back stronger from a dark time. Even though she qualified for the final through Andra Chansen, the odds for Anna are better than for some of the direct finalists.

With odds of 36 to 1, big superstar Mohombi is listed quite low with the bookies. Yes, the vocals are not perfect (at all), but his name, fame and act are huge. Mohombi plays with the visuals on screen in a way only the likes of Mans Zelmerlöw and Sergey Lazarev have done before. And perhaps his past performances in the world are chances to give him victory. Because for receiving love and votes, perhaps just starting with saying ‘Hello’, is enough.

Another big name is Jon Henrik Fjällgren, the Swedish-Sami singer and jojkare, an interpreter of Sámi joik. He was the winner of Talang Sverige 2014, the Swedish version of Got Talent. He has participated in Melodifestivalen three times, in 2015 he placed second, in 2017 he placed third, and in this year he has already reached the final. The main reason? A very solid and strong televote has always had his back.

Nano Omar was the runner-up of Melodifestivalen 2017 with ‘Hold On’ and it gave a big boost to his career. Now he is back with ‘Chasing Rivers’, but based on the odds and his position in the charts, he will not be a contender for victory this time around.

Just like Wiktoria, Lisa Ajax took the Melodifestivalen stage in 2016 and 2017 already. With spots in the subtop of the final on both occassions, odds are she will be in the middle again in 2019.

Newcomer Malou Prytz, only 15 years old, has a fun and uplifting song. Vocally she still has a lot to improve to be ready to win Melfest and go to the biggest music competition on this planet. But her enthusiasm and drive show she has the capabilities and chances to return to Melfest in the future.

The 1993 Swedish entrant to Eurovision is back and qualified for the final through Andra Chansen. The producers, who know this group for a long time, gave them the pimp slot, closing the show on Saturday. But another turn at Eurovision, after ‘Eloise’, is not likely to happen.

Lina Hedlund took part at Melodifestivalen five times before and is the ‘veteran’ of the show. Most of the times she was a member of the famous group Alcazar. Even though she qualified for the final direct, not many people expect Lina to be ‘Victorious’.

So you have seen all performances and read hat the bookmakers are thinking about the results on Saturday. But, stubborn as we can be, here you can also see the top-3 prediction and personal favourites of some of the editors of ESCDaily, that have followed Melfest this season:

The conclusion of Melodifestivalen 2019 can be followed here at ESCDaily. We have a special liveblog for you during the show, that starts at 20:00 CET on Saturday the 9th of March. See you there!